Wow, finally. Once again big Army bringing up the rear.

Could have used these back on my Astan trip. Instead we launched AT4 after AT4 at qlat walls, with negligible effects.

The Army procurement process never ceases to amaze. Unit after Unit submitting urgent need statements and finally the PEO, etc. get around to making it a standard issue.

It makes sense to someone. I'd like to know the line of thinking behind the adoption of the various disposable launchers, LAW/AT4/Dragon/Javelin...

Again, I do think there is something to everyone having an AT weapon immediately available. But, I can see the issue with it not being the right warhead for the job...

As far as I have heard and can tell, the AT-4 is a disposable Carl Gustav.

The problem is the US bought it in the 80s, called it the M136 and said "done!" There are variants and improvements on the AT4.  We could at least have upgraded to the CS (confined space=less backblast) one. Saab-Bofors don't well explain everything here http://saab.com/land/weapon-sy...support-weapons/at4/ but the brochure is a little more helpful: http://saab.com/globalassets/c...y_brochure_en_aw.pdf But they include a couple HE types.

You can even put aimpoints on them!

Anyway, I've always thought that it made sense to buy a system of systems. We give everyone whose job is AT gunner a Carl G, and buy a selection of awesome rounds. Then, we also buy a bunch of AT-4s with /the same selection of rounds inside/. As much as possible, get the same performance so they do the same thing whether the lightweight-disposable sort of backup capacity, or the reloadable primary weapon with a good sight and so on. But I may be crazy.

I can find no evidence anyone makes an FAE (thermobaric) round for the Carl Gustav, but there's no obvious reason you could not. I suspect if the US Army asked, they would appear. There are a lot of other options. Wonder what will be in the US inventory. Here's a cross section of the ADM401. I know you want that one: 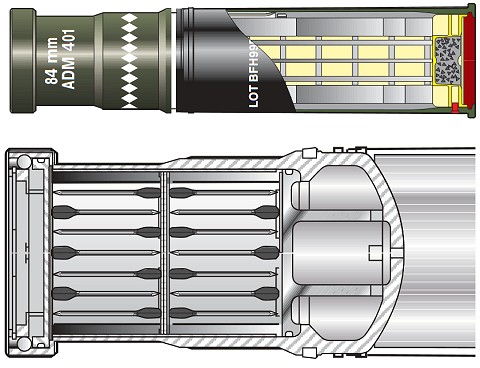