Some photos of it all packed from the USAF:

I suspect they are just showing the rifle and some other survival kit bits are not included. It's got a lot of stuff, not just a viz panel, rifle and (how many?) mags.

Although the survival kit is in the seat, it comes away with the aircrew during ejection.

Another unusual feature is related to the survival kit. In most ejection seats the survival kit is a rigid fiberglass box that makes up the seat inside the seat bucket. The ACES II survival kit is a soft pack that is stored under a fiberglass seat lid that is hinged at the front. When the pilot separates from the seat, the straps that connect him to the survival kit lift the seat lid up and forward. The seat kit then slips free from the rear end. The seat lid is latched in place normally, and released at seat separation when the Restraint Release Cartridge fires and rotates a bellcrank that releases the seat lid, shoulder harnesses, lap belt, and chute mortar disconnect. On the front of the seat bucket is a port that allows the crewmember to select the operation mode of the URT-33C survival beacon. The port also has a switch that allows the crewman to select automatic deployment of the seat kit, or manual deployment. For the URT-33C beacon, in the AUTO mode, the beacon would activate at man-seat separation. (For maintainance, a equipment release knob is located at the top rear of the right side of the seat bucket.)

Where the survival kit bag goes: 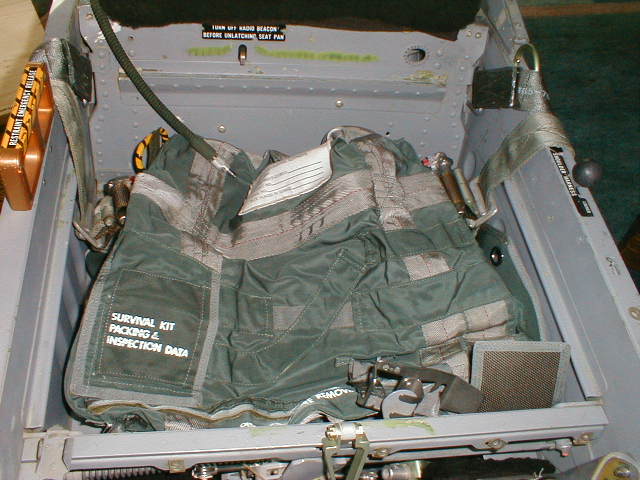 That's the ejector seat bottom. A couple things go on top of this then you sit on that.

And, how it (here: "Rucksack") deploys below the aircrew during the descent phase after ejection... more or less. The seat is far away from you by then, and the raft doesn't deploy in mid-air.

After ejection and deployment of the parachute, the survival kit is deployed by pulling a single lanyard, dropping survival equipment approximately 30' below the survivor.