Unlike the Maxim thread, these aren't in current service or anything so far as I am aware, so hopefully I can make it on topic enough, else just move it out of here.

But... the Historical Firearms people are making a book on the PIAT, and... while I don't really follow if it's just an eBook you get a free copy of or what, but you can register for it now: 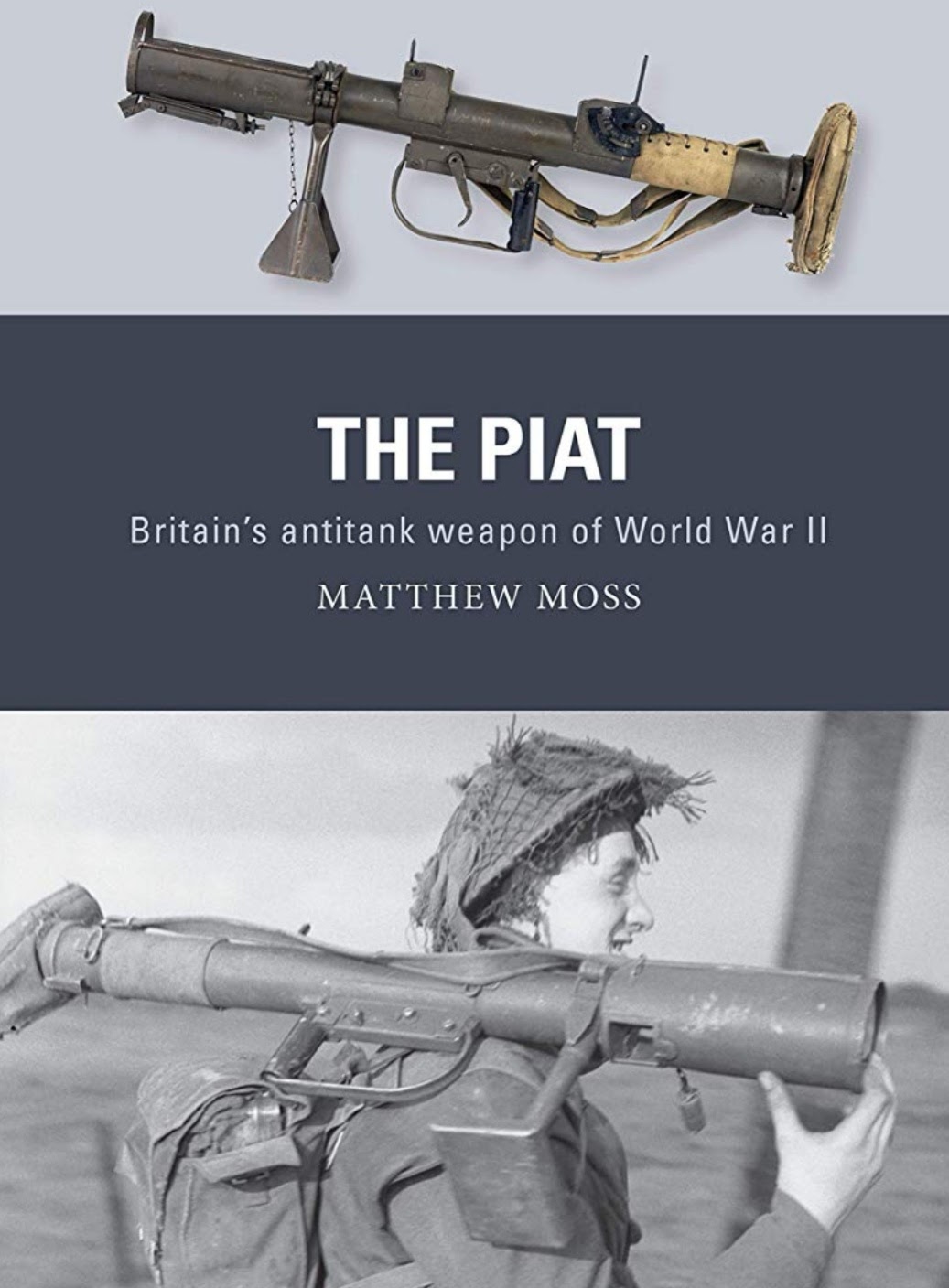 I always found these interesting weapons to discuss tactically, because of their unique nature. No backblast, so can be used indoors and otherwise in tight situations. Minimal firing signature so some of the need for short flash-to-bang or shoot-and-scoot can be negated. But very, very short range (like 100m). Overall, pretty effective. Biggest downsides are attempts to over-use it, so disappointment it's not also a bunker-busting arm (it is very, very HEAT only).

I've long been a proponent of not always using weapon systems at max effective, but getting as close as you can otherwise, to increase hit probability, take advantage of the situation (close with the objective) faster, etc. So, zillions of tales of a major peer conflict with a hilariously short-range AT weapon are good fodder to discuss this.

Work for the book: 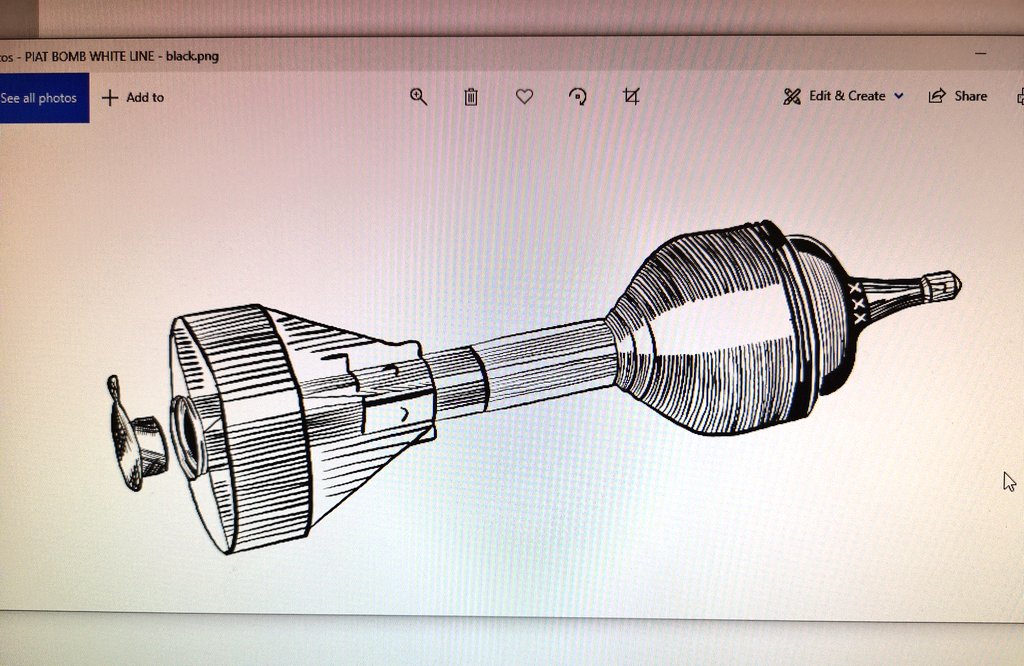 Warsaw 1944 The PIAT proved to be an extremely useful weapon during the 1944 Warsaw Uprising. When fighting began the Home Army could call on less than fifty PIATs. 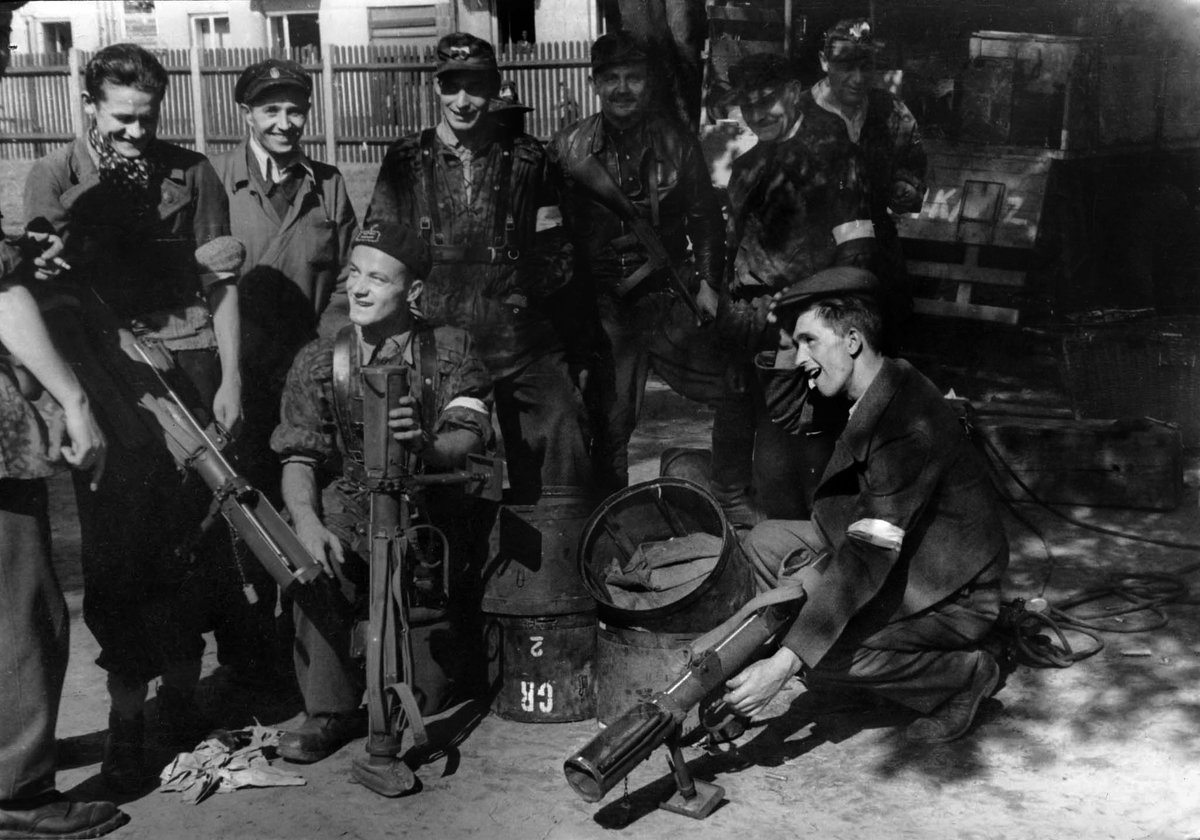 By the 17th August, RAF drops had delivered an estimated 70 PIATs and 1,700 bombs. The street fighting in Warsaw was characterised by fighting in and from buildings. The PIAT had a significant advantage over other AT weapons like the Panzerfaust as it had no back blast. 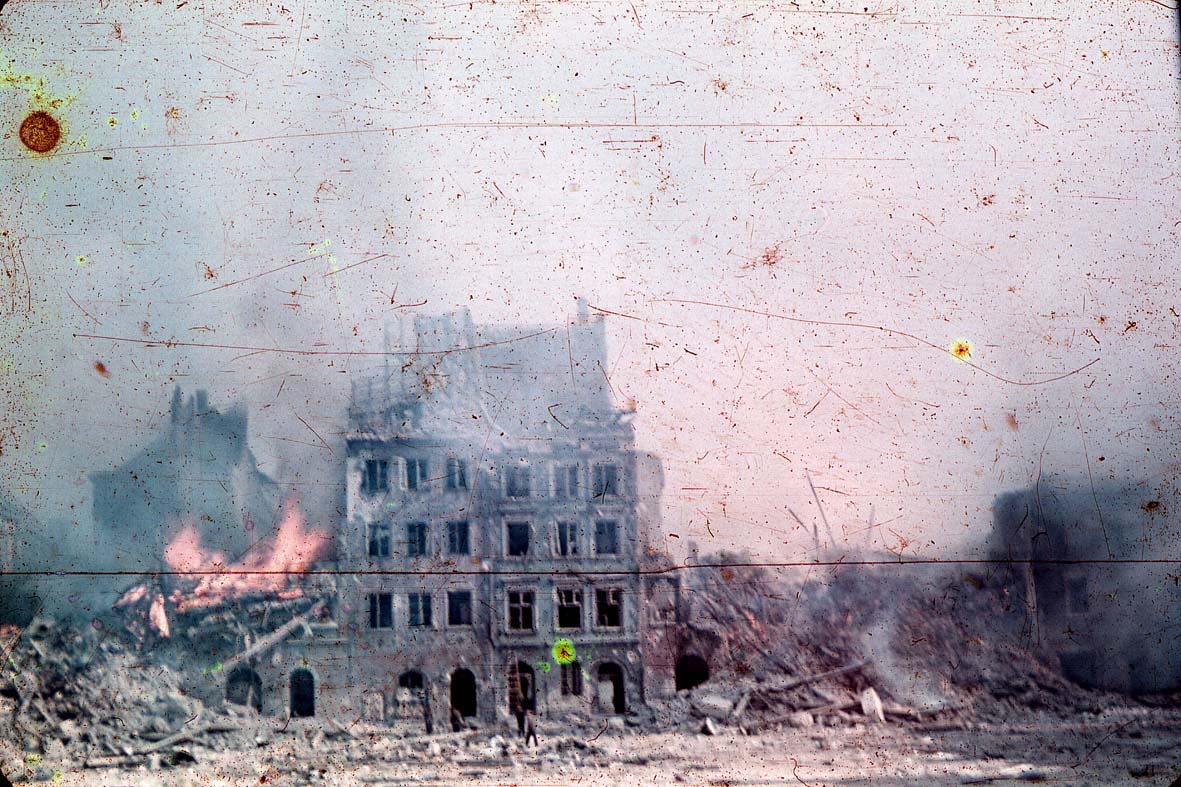 The close urban fighting also negated the PIAT's greatest limitations its rage (a max effective of 100yd) and its accuracy. It's estimated that over 200 PIAT's were dropped to the Home Army in Warsaw but how many reached them is unknown. 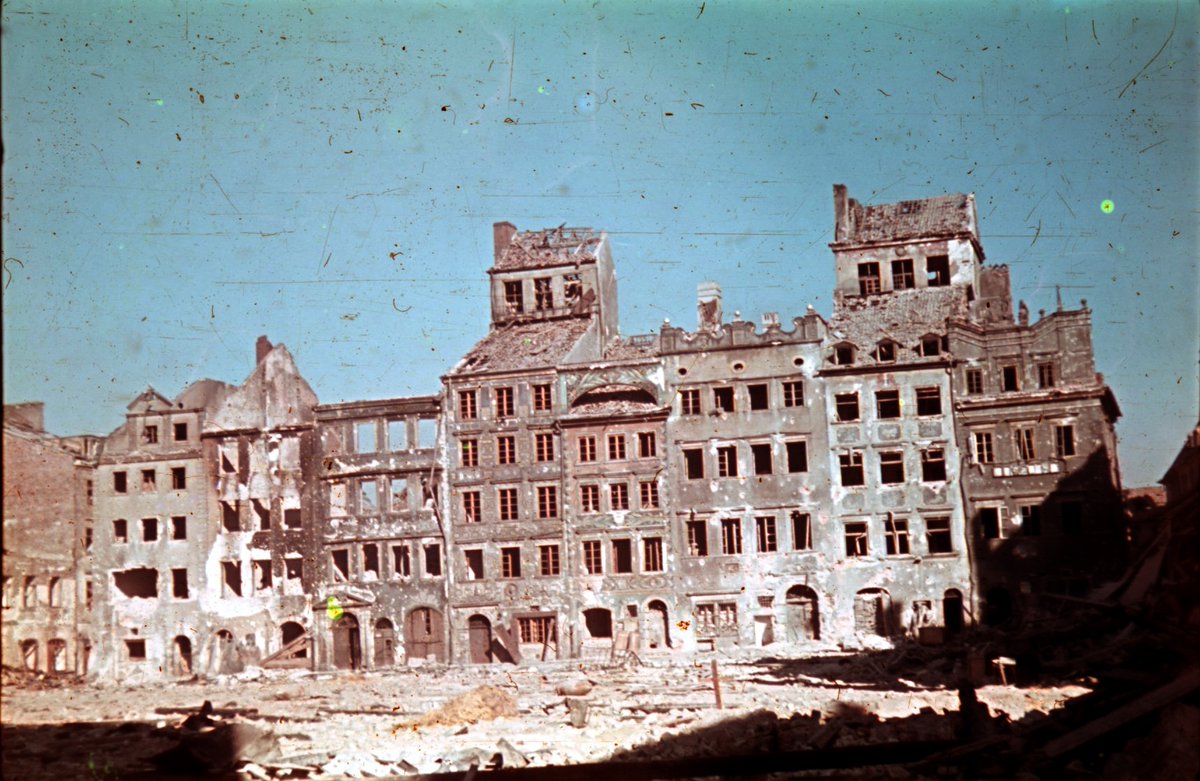 From surviving accounts we know that they were used against German armour, Goliath remote controlled bombs and in the 'house breaking' role to damage buildings and blow holes in walls.
Even in situations that may have helped the defender to take on a German armoured fighting vehicle with a PIAT (or even just a molotov) took immense courage the likes of which are difficult for anyone who has never been in combat to comprehend. Dutch PIATs being refurbished in the 1950s. They retained in service through this decade. 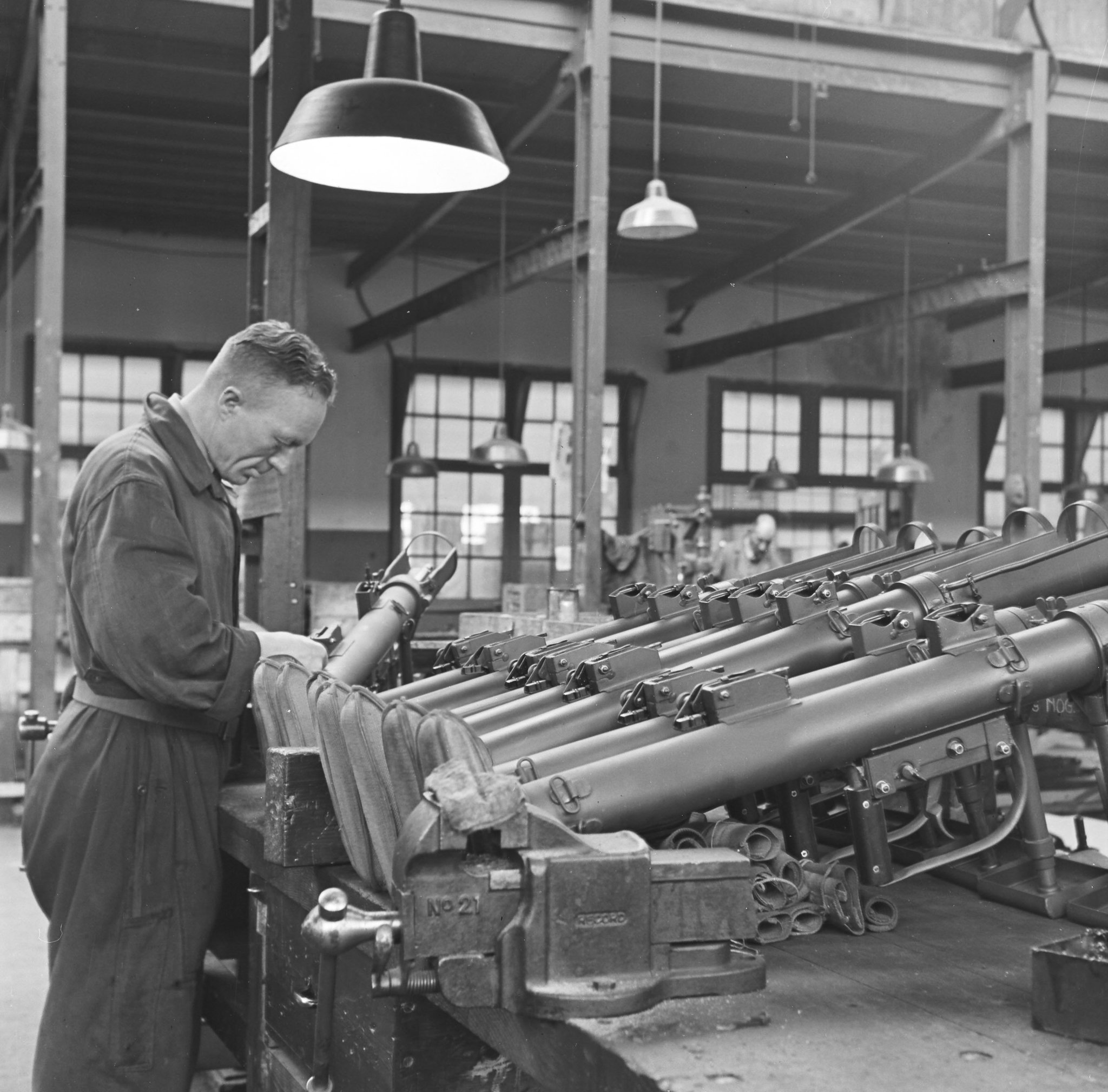 Frank Jefferson VC of the Lancashire Fusiliers in front the STUG he charged and knocked out at Monte Cassino on 16th May 1944. 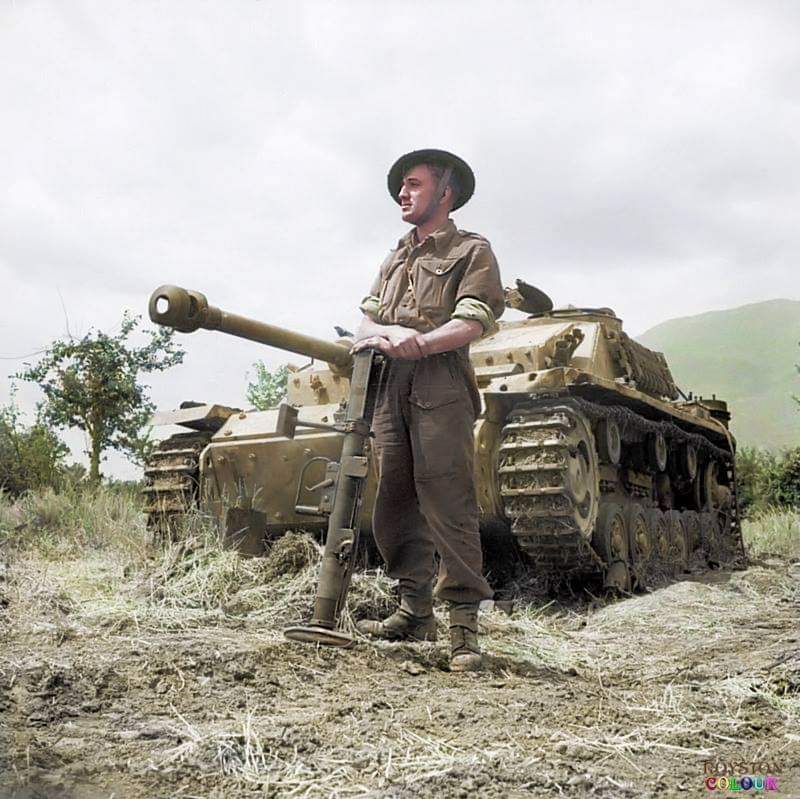 I never see the ammo carriers other than just on the ground. Hmm...

Your title made me laugh.  There was this Irish kid named Faughnen in our class at Quantico.  He always had a quip for the occasion.  Well, we had this Brit exchange officer come and give us a lecture one day.  One of the slides was something called a "Wombat".   That along with the class we had on the recoiless rifle led to the following scenario.  We're out doing "platoon in the defense" or some such shit and they rolled up these M-60 tanks on us (yeah this was 1977).  We're all cowering in our holes when you hear this "Fire the Wombat!"  in this deep, New York-Irish accent.

My buddy Tim had one in the 80s, bought from a vendor on Shotgun News.  Not being a firearm nor NFA it came freight with three or four training bombs.

That thing was a hoot -- like a steel Nerf cannon.

I get the reference from Johnny Frost on a roof top in Arnhem if no one else does.

Nice title." A Bridge To Far "is one of my favorites. Interesting development in that weapon system. I think our M1  Bazooka may have been a better weapon far as operation and use.

Oh, I also stole the title from the Historical Firearms folks. They are gonna have shirts, so follow their link if you love this.

And yeah, this is something I see at least in part twice a year

Not just Polarbear31, but many comments forever: Why did those silly brits not just use Bazookas?

Hop in the time machine, ask someone at the MOD. A: "What's a Bazooka?" It entered service in a similar timeframes, so nothing to compare to, ask to borrow. These are both first generation (ish) weapons to fire what we'd later call HEAT rounds. They had to work it out.

Spigot launchers mean no limit on warhead diameter, so in theory it should be better. Dunno why we all gave up; Israeli industry made a series of spigot mortars and illum projectors up through at least the 80s.

Anyway, the Bazooka, at least with the first ammo, was notoriously unreliable, another year before it was worked out, A1 variant, and ready to be usable for real. Early versions were even withdrawn from service for a while for being entirely ineffective (no proof of a single K in North Africa). Still a couple more years before other issues (reinforcement, round sticking on launch and blowing up in the tube, ricocheting off sloped armor) were addressed. By the time it was all working, it was pretty heavy and complex. The Korean era Super Bazooka was a wholly different and big but perfectly useful weapon based on starting over and cribbing off captured Panzerfaust, but clearly not available 5 years earlier

Range is often quoted as 300 m, but that's MAX range. Effective range was 140 m. So... also not much better than PIAT. Plus larger, heavier, and you trade recoil for backblast.

So, PIAT was a working weapon, fast. And, no backblast, so very good for some situations. Only in retrospect is it laughed at, I think mostly because it was a dead end, with no Super PIAT, and real descendents.

An interesting account of the PIAT in use during Market Garden is that of VC recipient Robert Henry Cain as recounted by his son-in-law Jeremy Clarkson.

Note: Some accounts identify the initial tank as a Stug-III.

Your title made me laugh.  There was this Irish kid named Faughnen in our class at Quantico.  He always had a quip for the occasion.  Well, we had this Brit exchange officer come and give us a lecture one day.  One of the slides was something called a "Wombat".   That along with the class we had on the recoiless rifle led to the following scenario.  We're out doing "platoon in the defense" or some such shit and they rolled up these M-60 tanks on us (yeah this was 1977).  We're all cowering in our holes when you hear this "Fire the Wombat!"  in this deep, New York-Irish accent.

Wombat was the wheeled or land rover-mounted 120mm anti tank gun used by light infantry units during my infantry time. They were the descendants of an 88mm, shoulder fired, anti tank weapon we developed towards the end of WW2 but never saw service. The Wombat was phased out in the 80s, replaced by the Milan anti tank missile.

You mean I can have my own Wombat now?  I always wanted to say that fire command.  Might be good for those pesky demonstrators.

@Community Member
I never see the ammo carriers other than just on the ground. Hmm...

How do we set it up with an OC payload? I bet that projectile will go right through an umbrella barricade.

And speaking of umbrellas and A Bridge Too Far...I want the guy giving the command to fire to also carry a furled umbrella.

More stuff from social media, often things in the book, but we get to see them now. The book, btw, is out. In the UK. But not for a month + in the US.

Many of these from the Canadian national archive. 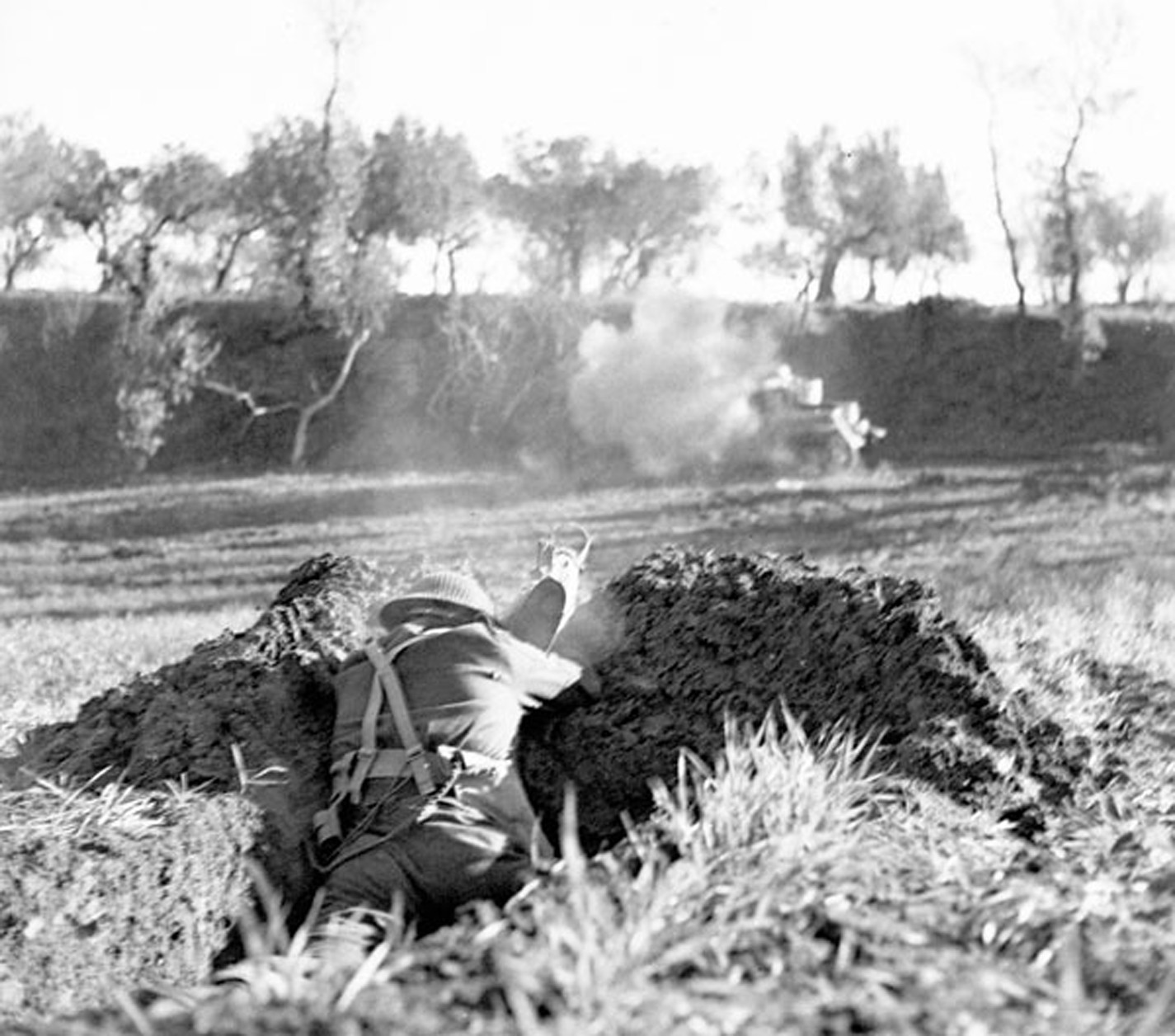 "Wise to duck after firing at close range. Until a flange was added the bomb tail debris could be fired back down the bomb tail tube as the shaped charge exploded and punched through armour. A number of PIAT gunners were wounded by debris."

GOOD example of why and how munitions get updated.

Lance-Corporal J.A. Thrasher of The Westminster Regiment (Motor), who holds the PIAT anti-tank weapon with which he disabled the German self-propelled 88mm. gun on which he is sitting, near Pontecorvo, Italy, 26 May 1944. 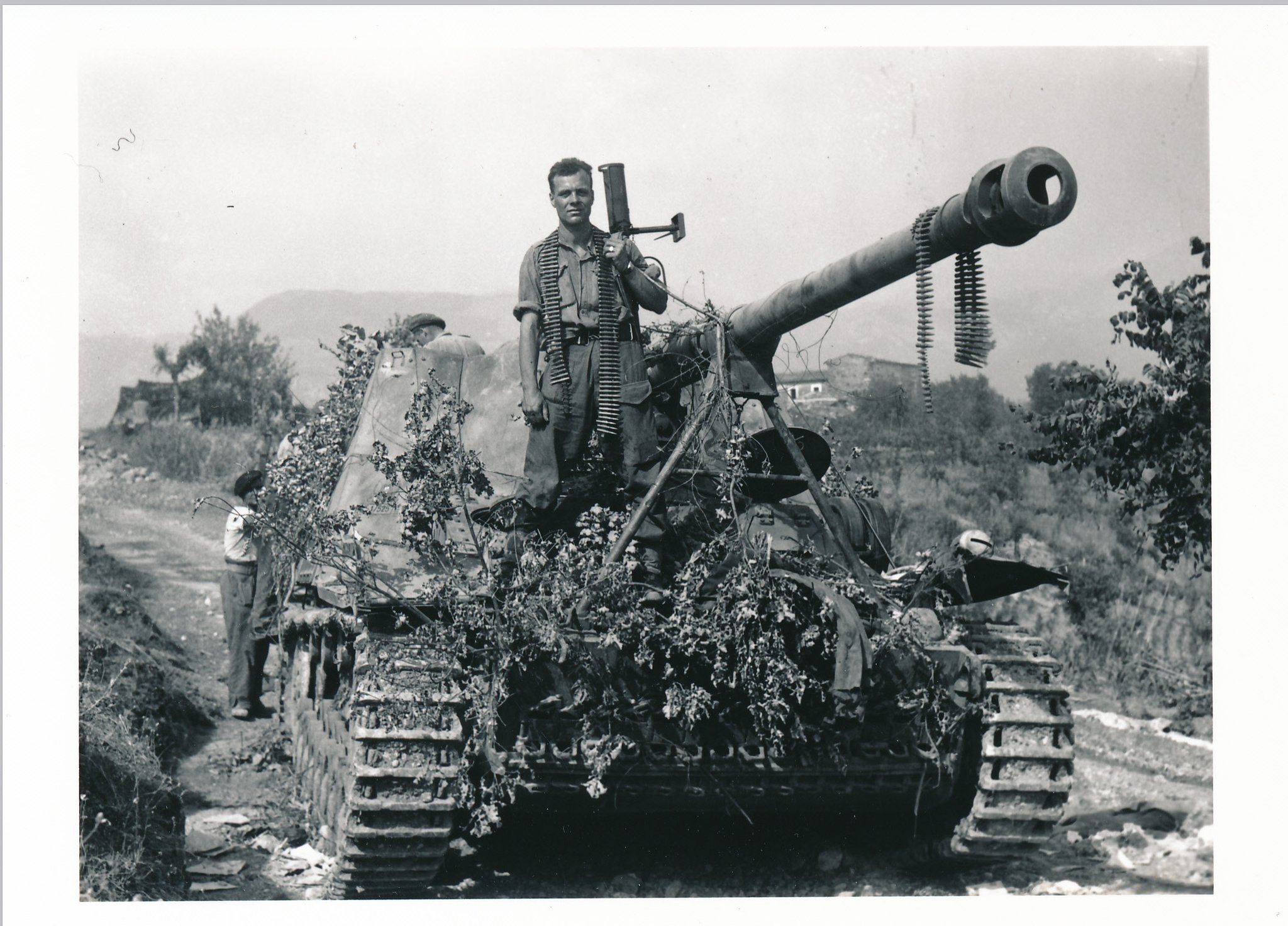 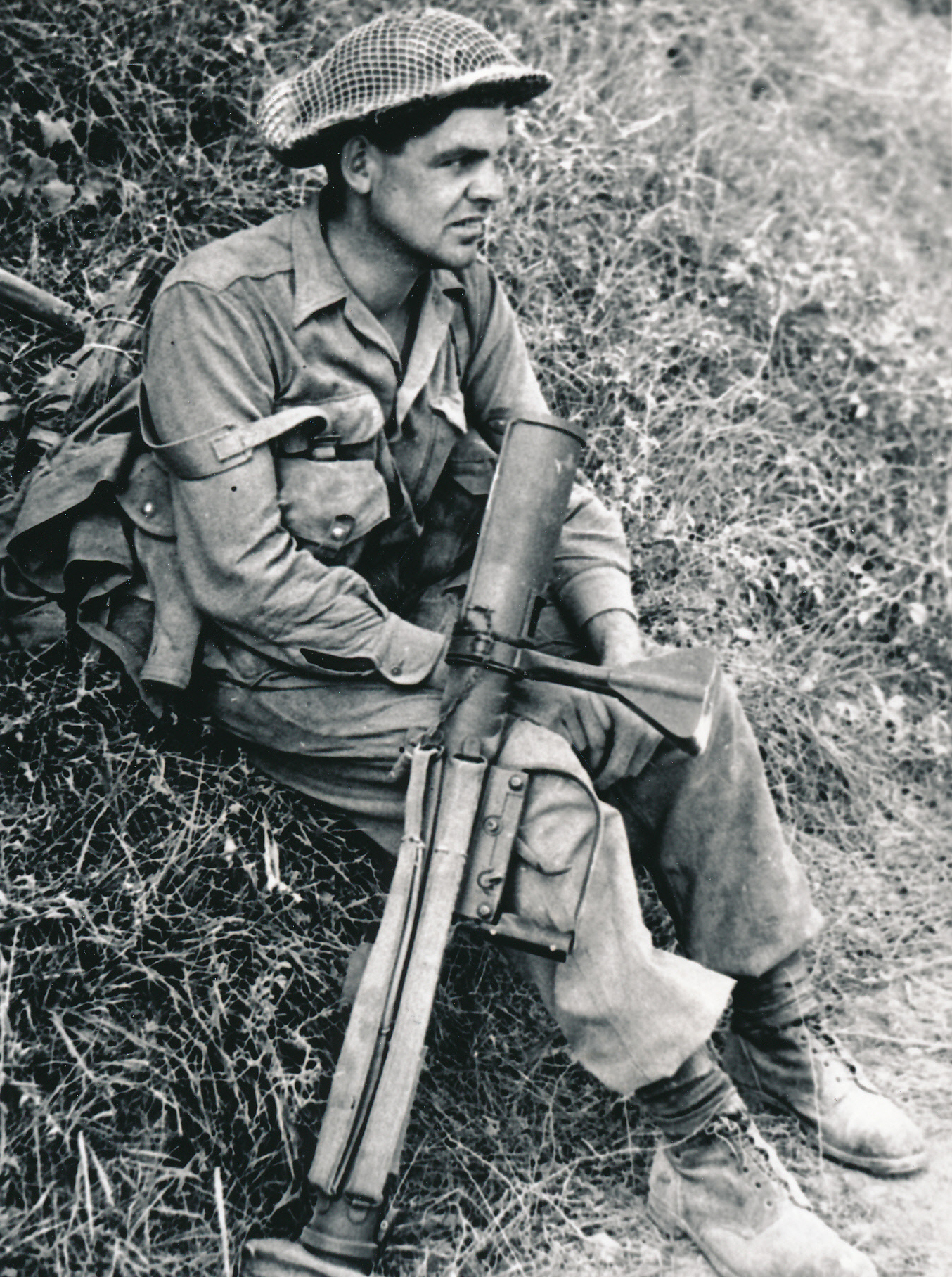 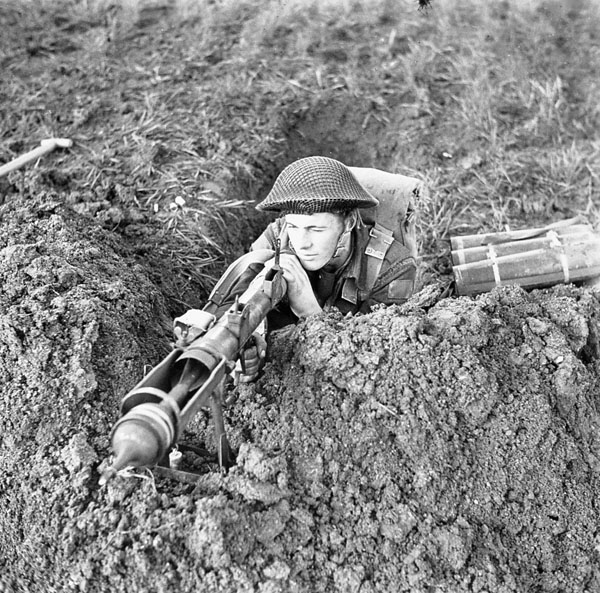 Corporal A. Hynd and Private Guenther, both of The Highland Light Infantry of Canada, manning a PIAT anti-tank weapon during a training exercise, England, 13 April 1944. 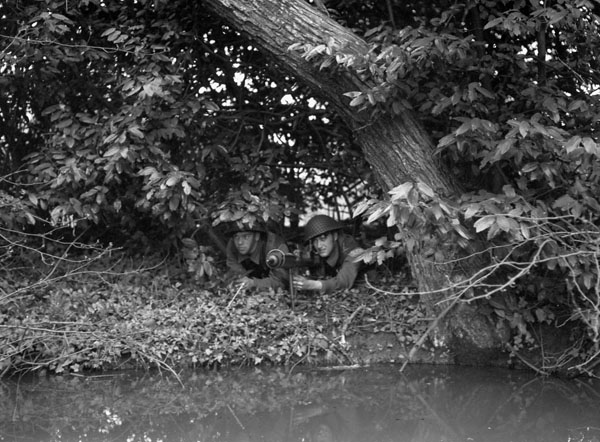 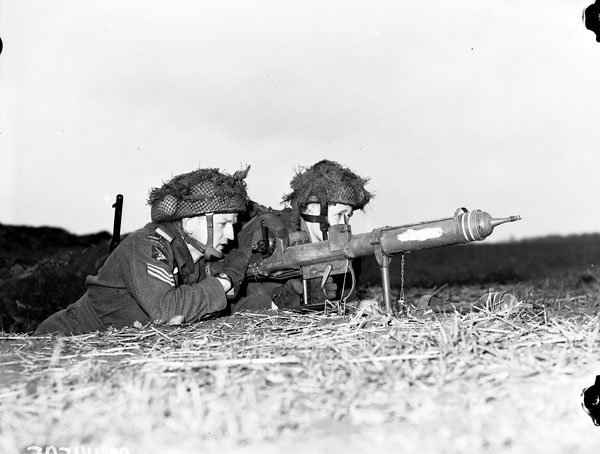 Lance-Corporal J.A. Thrasher of The Westminster Regiment (Motor), who holds the PIAT anti-tank weapon with which he disabled the German self-propelled 88mm. gun on which he is sitting, near Pontecorvo, Italy, 26 May 1944.

Westies!  Finest unit from British Columbia (but lacking the PR machine of the Seaforth Highlanders or the BC Regt).  As the first all motorized unit in the Canadian army (everyone mounted in universal carriers, White scout cars and half tracks), it became the 'fire brigade' for 5th Armoured Div.  Oldest unit in BC (disputed by the afore-mentioned a-holes in the BCR), largest current reserve unit, the Royal Westminster Regt (as now called) sent more volunteer reservists to Afghanistan than any other unit in BC.

Another honourable mention would be Ernst 'Smokey' Smith of the Seaforth Highlanders.  It was his skillful use of a PIAT  that earned him a VC in Italy Oct 44 taking out 2 Panthers.  His section in total accounted for 3 tanks, 2 SPGs, a few half tracks and Pz Gren dudes.  He was the last Canadian VC recipient to die (2005 - I was at his funeral, FWIW).  Rumour has it he was locked up in a cell in Rome the night before being awarded the VC so as to 'keep him out of trouble'.  Being from New Westminster, the natural move would have been to join the Westies (above) but he stated he couldn't stand the idea of bein in a unit where the officers had been his high school teachers...

One available at auction right now.  $1K, no FFL required.

Functional PIATs are not DDs themselves? Really?

I think maybe some redneck SOTs need to be told this, see why and maybe we get a whole crop of spigot "flare launchers" built before anyone catches on