Here is my bud's rucksack ready for deployment.  He has the DG16 frameset replacing the welded alum TT frame on the TT Rgt ruck. 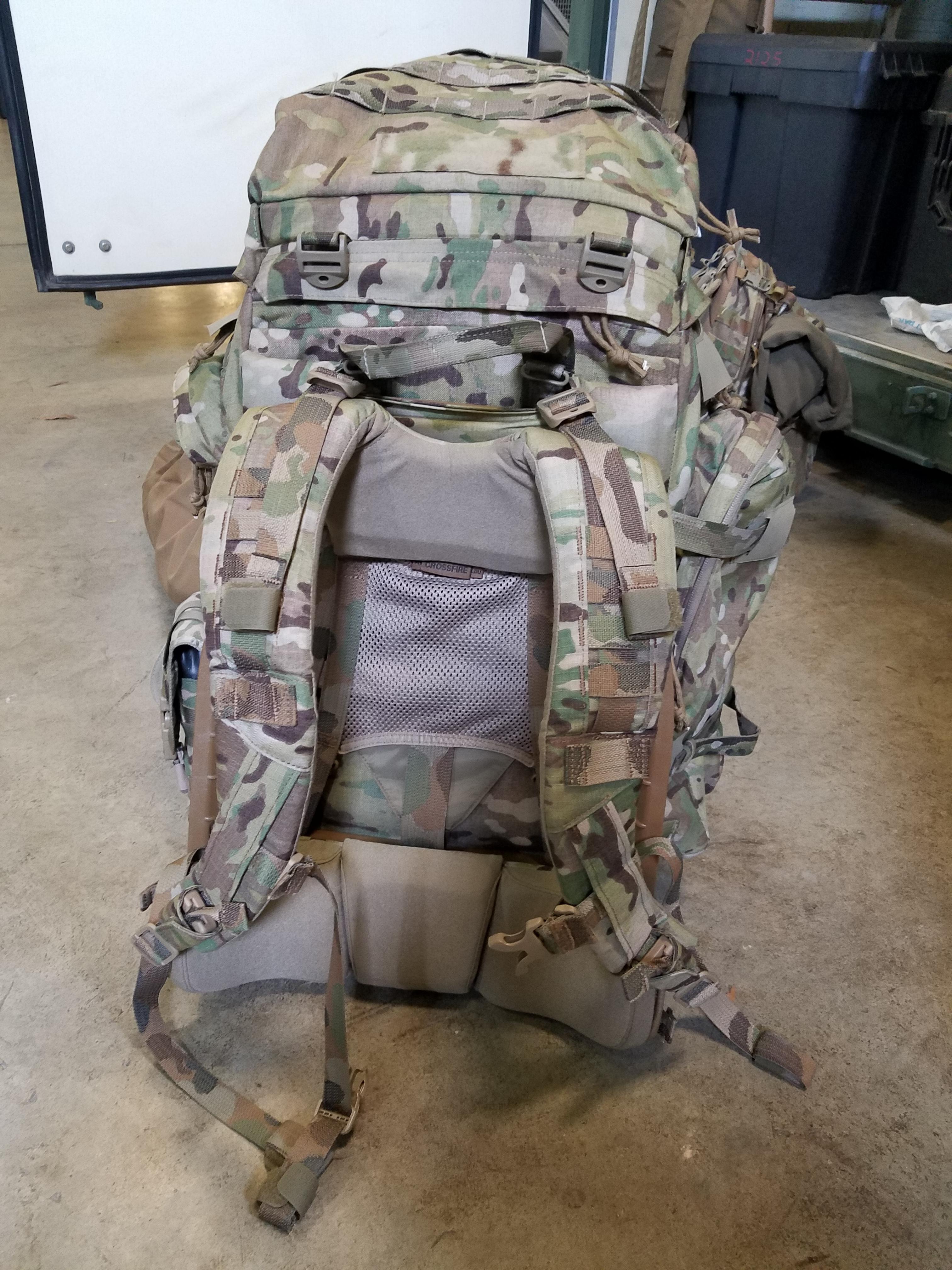 The pocket fits the frame nicely with top stab straps in middle slots.  Other straps are tied down on sides and bottom. 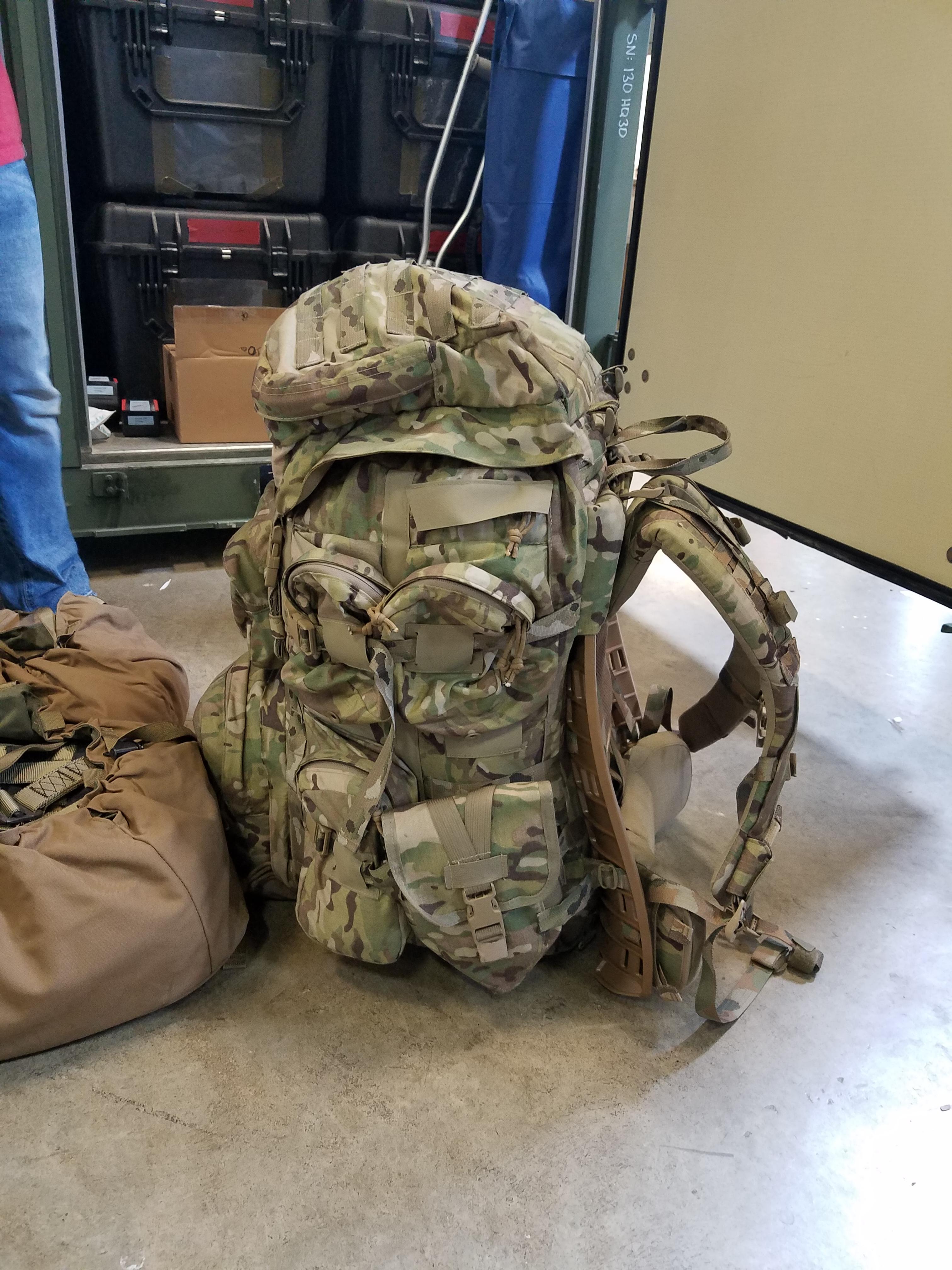 This thing is a monster.

Take Action
Original Post
theGuzzToo much time on your hands

Was there any particular reason for choosing the TT ruck over others?

Well, long story short, he wasn't happy with his issue MR stuff so he went back to an ALICE-type system, but with the alum external frame, it was sorta the other extreme.  You know, too soft, too rigid.  So along came the DG16 frameset which hits the sweet spot.

His team already bought DG3's  for lighter load outs but I don't have the larger DG16's yet in MC, so they're running a combo of MR and ALICE-type large rucks for this pump.   I'm hoping to have the larger rucks for him for his next deployment.  But at least he has a good frameset.

“Wasn’t happy with his MR stuff so he went back to ALICE”....wow you don’t hear that everyday. Any more details on that? Very curious. I’m a gear guy but I’m loathe to say one company has all the answers even with a company like MR....but versus ALICE?

I know an annoying number who stick with or even return to their ALICE packs. Makes me nuts.

No , I can't get enough details to make sense past maybe familiarity. Even kludgy stuff like sleep system rolled on the outside is what they are used to, so change is hard I guess.

Yeah I knew and know a few lol

A bit off topic but....at work we wear external armour carriers. We’re now into our second GEN and they are MOLLE. Most of the guys have taken advantage and transitioned all their belt weight onto the carrier. Except one guy....”no sir, I prefer my thick as fuck Uncle Mikes/ancient/duty belt from hell/back injury causing load out”. What’s worse is he never even tried load carriage on the vest. Oh well.

There are quite a few professionals in the USMC SOF community who prefer ALICE.

The training pipeline uses ALICE or an ALICE derivative paired to a Tactical Tailor bag.

It just makes sense for a lot of folks.  They don’t want to deal with the risk of a busted zipper, in many cases.

Makes sense. Just to be clear, I hope my posts didn’t come across as ridicule.

No, it's  valid question for those of us that aren't issued MR goodness; you may be wondering WTF?  But as the man said, there is a certain affinity for the ALICE-type systems within the community because: 1) that's what they were brought up with; it's just "home" for a lot of folks, and 2) it still fucking works!

So yeah I get it, on the face of it, you're wondering why a guy would shit-can his high-speed Gucci pack and "regress" back to the lowly ALICE-type system.  Two reasons really.  The bag shape/ external pouch arrangement, and the frame.

First the bag.  Within mil-spec circles there is an affinity for a square-shaped bag with extensive external pouch system.  The reason for this is it simply works for them.

The second reason is the frame.  No matter how good an internal frame design you make, there are those who believe that an external framed-ruck is just the optimal design for mil-spec work.  Opinions vary but I count myself as among this group as well.

The reason my buddy has gone this route is because he has spent extensive time with heavily loaded internal framed rucks and was not happy with them.  He used the original NICE framed rucks, on operations, in the 07-08 timeframe, and was not happy with them.   So he fell back to the tried and true ALICE-type system.   Better but still issues. He then decided to give the new gen NICE frame a second chance, which was an improvement, but still not quite there.  I then introduced him to the Crossfire frameset.  Then he was happy.

Now the whole point to this exercise is this frameset gives you the best from both worlds.  And is back-wards compatible with any ALICE-type system.  So while on the face of it, it may sound a little crazy, it actually gives you the perfect blend of old and new.  He really loves this set up because, well, it just works for him.  And as added bonus, he said wearing BA with it is much more comfortable, compared to a MR pack with bolsters.  So there you are.

Wow! Thanks very much for that insight, very helpful. And it triggers another memory. An old SOF magazine article ( (mid 90’s ) on South African Recce Commandos; they carrry monster loads and were using external frame packs.

Huh, for some reason blending old and new methods didn’t occur to me, but it makes perfect sense. I had the opportunity to fiddle with a Regiment Ruck, and if you’re a fan of external pockets it seemed like a winner.

I'm issued  3 MR rucks and I've never used them. But what I also got issued was a Try Jungle Ruck...now that ruck I use all the time. It's a bit small at 40L but has a cool feature - it accepts the Tyr zip-on panels and assault pack so those can be removed and added to my plate carrier if needed. I can also order different lids for it.

Anyway, not to take away from the OP, but ya, some of us can't let go of the old ALICE style rucks...

Yeah I'm tracking that.  I played around with a lot of frames and suspensions in conjunction with the ALICE style bags; the DG16 is what I've been looking for, for a long time.

ALICE was first ruck I ever humped, I love that system. That being said, for work use, DG-16 frame is 1000 times better. My ALICE is retired to recreational use now.

Yeah and I'm gonna mod your old LBT bag into the latest artic ruck std.  Gets rid of all Molle and gives you some shit-hot pouch attachment options.  Been tits up with a cold but will get back on it soon.

Sweet, no rush. I’m jacked up right now so no upper body or rucking till I’m healed.

Sign In To Reply
Post
Manage Topic
Premium Memberships have been lowered to $5/mo. The Team Room is now a premium member's area. If you'd rather not go month to month with a credit card, you can mail payment to: ATT: Mike Lose ATS Tactical Gear 15858 FT. Campbell BLVD Oak Grove, KY 42262
Concealable Armor under Army Combat Uniform
28 minutes ago
Military Ski Programs, Equipment, TTP's and other issues.
4 hours ago

Will a 20 MOA rail work for short distance?
7 hours ago