Starting around 10 years ago, as I starting getting officially old, and injuring myself more than trivially, I had some good conversations with PTs, read what all you guys said, and so on, and have changed up my footwear. It's mostly good, but... laces.

I hate laces. Now, I like snug shoes so I'm not a slip-on guy or anything, but the time to lace up, the chances of un-tying, need to adjust partway through the day/run/ruck because laces stretch, etc. just always annoyed me. For decades now.

So, I went through a series of options, and for a bit got into a couple styles of the elastic laces. But then I got a pair of Topos with the cables, and the windlass system. It... was damned good.

(not these, but this sort of thing)

But, it comes only on installed on shoes, the windlass thing is ugly, clanky, and sometimes snagged and released. But I loved the idea, so poked around and just as I was about to leave for my big trip last year, I stumbled across these while waiting for the wife to finish trying on stuff in REI.

They are officially replacement laces for some specific series of Solomon shoes and ski boots. But, they are really just funny, tiny, non-stretch laces with a retention toggle thingy. No idea what they are made of, but it's not steel cable or anything. Something synthetic, not especially hard to cut, and easily melted (when I have to de-fray cut ends).

But, it's perfectly performing so my favorite system. If I can get longer ones, I am gonna try them on my boots. They basic thing is that they are pretty slippery, so there's none of that normal lace thing where they bind up and you have to put your finger in and loosen or tighten down the lace route. Shoes go on easy, come off easy, and are more comfy as the total lace tension is distributed evenly.

No stretch so they never need to be adjusted en route.

And, they are apparently not prone to wear. My previous ST2s are totally worn out, so I got a new pair, and put new laces on them. But the old ones, and the hardware, look new.

The installation is one-way and/or destructive so no way to disassemble and re-use them. Luckily, pretty cheap. I bought these off eBay, for $12. Compared to the price of shoes, not bad.

Lace like normal. Due to fraying, as much thicker as it is, I just keep the end loops on during lacing

Once the lacing is done, get the retention toggle bits. You need to assemble it.

The box is slot side up, thread both laces through and align one to each side.

Stick the gear-looking-thing inside, wider part down.

Then you clip the top bit on. It's not super easy to describe, but the wings are a spring, and face forward, the nub locks into the gear thing.

This allows you to grab the toggle and pull forward pretty naturally, and it loosens.

Anyway, then, cut the laces to the length needed to give you enough to loosen. You can use it like this, so try it before cutting.

Once you cut, thread through the end lock thingy and tie a knot in each side.

Make it as small as possible, as there's not much room. Probably good to trim the remaining cord after the knot also.

Stuff the two together. I need to use pliers to get them to lock, but you may have the hand strength to do it without tools.

If your shoes have a "lace garage" at the top of the tongue, this is supposed to be rolled up around the end barrel thing, then tucked in.

I just stick it into the last loose lace cross, and it's pretty secure for my purposes.

I have a couple pairs of Salomon shoes and boots with that lacing system from the factory, it’s really awesome. I didn’t know you could convert other shoes to it.

Yep, the Salomon system is great. But on my sneakers I’ve been doing shock cord with cord locks for a few years now.

The first thing I do when I get new boots or hiking shoes is replace the laces with 550 cord. I don't remove the inner strands. I use shrink tubing on the ends for added durability.  Never had issues with stretching or breaking.

On my hiking boots I use more cord than really necessary.  If I have an odd need for cordage while out in the woods, I can cut them down to the  minimal necessary amount just to keep the boot from slipping off my feet, the rest gives me a small amount of free cordage

The first thing I do when I get new boots or hiking shoes is replace the laces with 550 cord....

Only, I do it to ALL of my laced footwear, to include running shoes and sneakers.

Yup, I also do paracord laces. Tried the latest iteration of Danner laces and they did the usual fraying. Not sure why shoelaces are so poor.

I did an experiment with the last boots, and had one gutted, one not. No perceptible difference in comfort, speed of drying, anything. And I never broke either one.

I also did these: 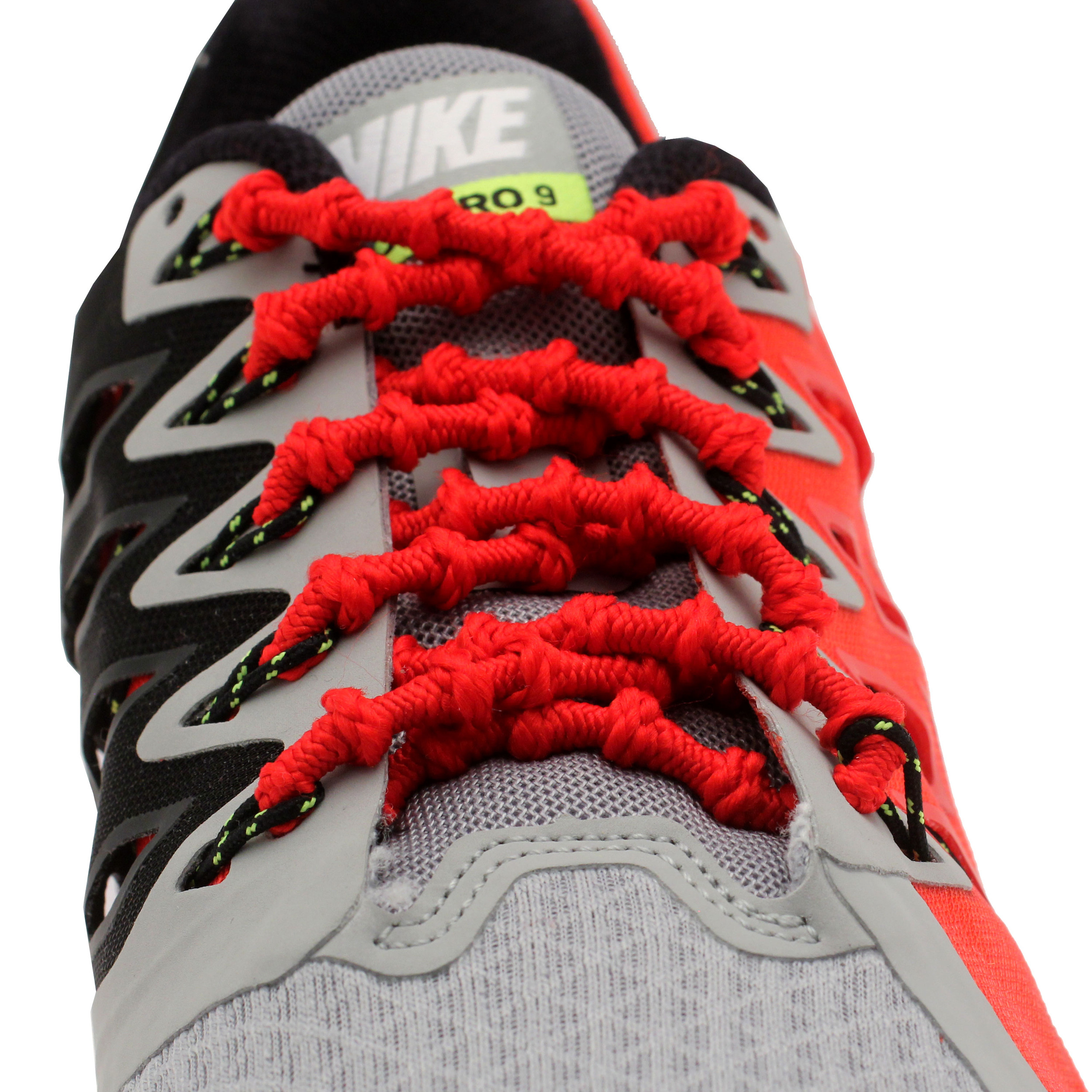 pre-"knotted" elastic laces, and the wife loves them, so has all my old ones.  We settled on the Xtenex ones. They may be a better solution if you need to keep different parts of the shoe at different tensions, and you can generally set them up to not tie or untie; you just get the tension adjusted right, then knot them, and use the elastic to slip them on and off.

Lock laces are also very popular with the thru-hiking crowd. They make different versions for everything from regular sneakers up to camo boot laces. The company website usually has a 20% off coupon for your first order if you give them an email address. I'm sure everyone knows how to make that work.

I've always just used waxed laces.  They've worked for me until they get too unwaxy, which is when you need to start double knotting them to keep them from coming untied altogether.  Soon after that annoyance it's time to replace.  It's about that time on my newish  Danner Kinetics now.