Google optimization nowadays results in the first fifty returns being absolute crap, so I come here looking for any primary source material that delves into the higher (at least perceived through combat camera photos) use of the M-1955 fragmentation use by the Marines, compared to the Army M69.

I follow that a lot of the photographs from that era saw the Marines in a more positional fight, or urban warfare like Hue, and the flak best made sense to wear then, but it was out on a lot of patrols as well.  The Army?  Not so much it seems.

I would say another way to look at it, would be to compare early war years with later, when discipline broke down, and guys wore seemingly whatever the hell they wanted.  Of course this varied from unit to unit, but I would be interested in seeing if this was a function of unit discipline, across the board, as the war wore on, rather than an Army vs USMC thing.

The Marine Corps (and Army) that went to war in the early sixties was a completely different animal in the late sixties, and into the early seventies.  The influx of drafties, the drug abuse, etc. had a huge effect on things.   So that's where I'd look for the disparity.

Might need to go back to fist person accounts from the time ("The Grunts", Anderson; "The 13th Valley", DelVeccio; "Fields of Fire", Webb; "Dispatches", Herr; "Tiger the LURP Dog", Miller; "Short-timers", Hasford; "Everything We Had",  Santoli, etc.)  Man I'd have to go back and find more titles.

Like Reply (4 Likes)
Take Action
CCCSDDO NOT try and wack off until your Doc says it’s ok. Ask me how I know this VIP

It might be just that it was old stock, plenty of it, and USMC usually got seconds as they were underfunded and Navy didn’t want to spend the $$$.

I ‘m fairly certain that the 13th Valley has no references to the use of body armor.   It has been forever and a day since I read A Rumor of War.

Good point about hand-me -downs.  The shit we had in Oki, circa 1979 probably never made it back to the states from Nam.

Man it's been a long time and hard to remember all this stuff.  I do remember reading these first-person accounts and wondering what planet some of these guys were on.  I think, as a general rule, the later accounts were without BA, although that's a gross generalization.

I was also more interested in MACV-SOG, LURPS, Recon, etc.  where they generally didn't wear BA, so I'm sure that skews my view (and memory).

As far as specific guys, maybe ask DelVeccio and some of the others, now that you have access to the authors through Amazon and the like.

I ‘m fairly certain that the 13th Valley has no references to the use of body armor.   It has been forever and a day since I read A Rumor of War.

'Fields Of Fire' did.

Yeah I think "The Grunts" did as well. 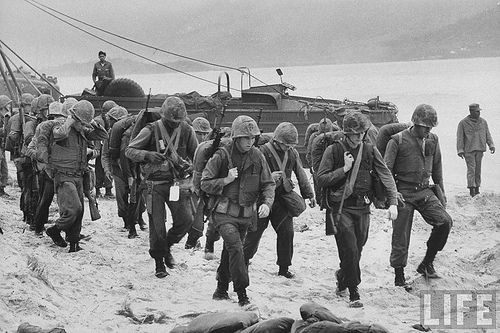 Kevlar wasn't invented until 1965.  Shelby Stanton's Vietnam uniforms and equipment book says typically the only Army guys who wore it were mechanized units like 11th Armored Cav; manned positions that required little movement (because it's hot and you don't dry in the tropics); and aircrew.

Those pics are telling, in that Jarhead weapons and equipment are little changed from Korean WAR .   Except for the M-14's, possibly "flak" jackets, that could have been any (admin) landing in Korea.

The Doggies have all the latest kit, including the "jungle" rucksack, jungle bedroll, maybe jungle cammies? and M-16's w/ 20-rd mags.

Also funny:  The Jarheads are all looking down, for discharge papers, I suppose.  Guy scratching head looks like he just dropped his keys.   The Doggies are all profiling for the camera.   Except guy in front: Where the fuck is the Guidon?  Other guy in front: A-gunner with tri-pod and two cans of ammo.   Fuck the guidon, get the -60 up here.  And fuck the cameraman.  In fact fuck everyone.  Good troop.

Reminds me of another book.  Remember "Guns Up!"?

And took a while to get to things like body armor cheap enough. First modern era stuff was ballistic nylon.

Anecdotally, the standard response I've seen was that Marines almost all had body armor, and the Army never did. Nope, even with a lot of contemporary DOD source stuff, I've never read anything formal about the issue or use of armor in VN. They did do research into effectiveness, and the Medical Corps et al took a serious scientific study of wounds and survival factors, so I bet seriously solid data is out there, even if on a mimeograph deep in the bowels of some library.

This has a decent review of the models and characteristics, which may help orient, and direct further research https://olive-drab.com/od_sold...dy_armor_vietnam.php

Sign In To Reply
Post
Manage Topic
Premium Memberships have been lowered to $5/mo. The Team Room is now a premium member's area. If you'd rather not go month to month with a credit card, you can mail payment to: ATT: Mike Lose ATS Tactical Gear 15858 FT. Campbell BLVD Oak Grove, KY 42262
External Carrier - 10x12 and 6x6 or 6x8? Soft armor.
2 hours ago

Kicking it Old School: Belts and Suspenders for LBE
12 hours ago