Having worn this Plate Carrier since 2011 I couldn't be happier with the investment.  Here is the story...

*If you hate reading, I did a video review as well: https://kitbadger.com/crye-precision-jpc/ * 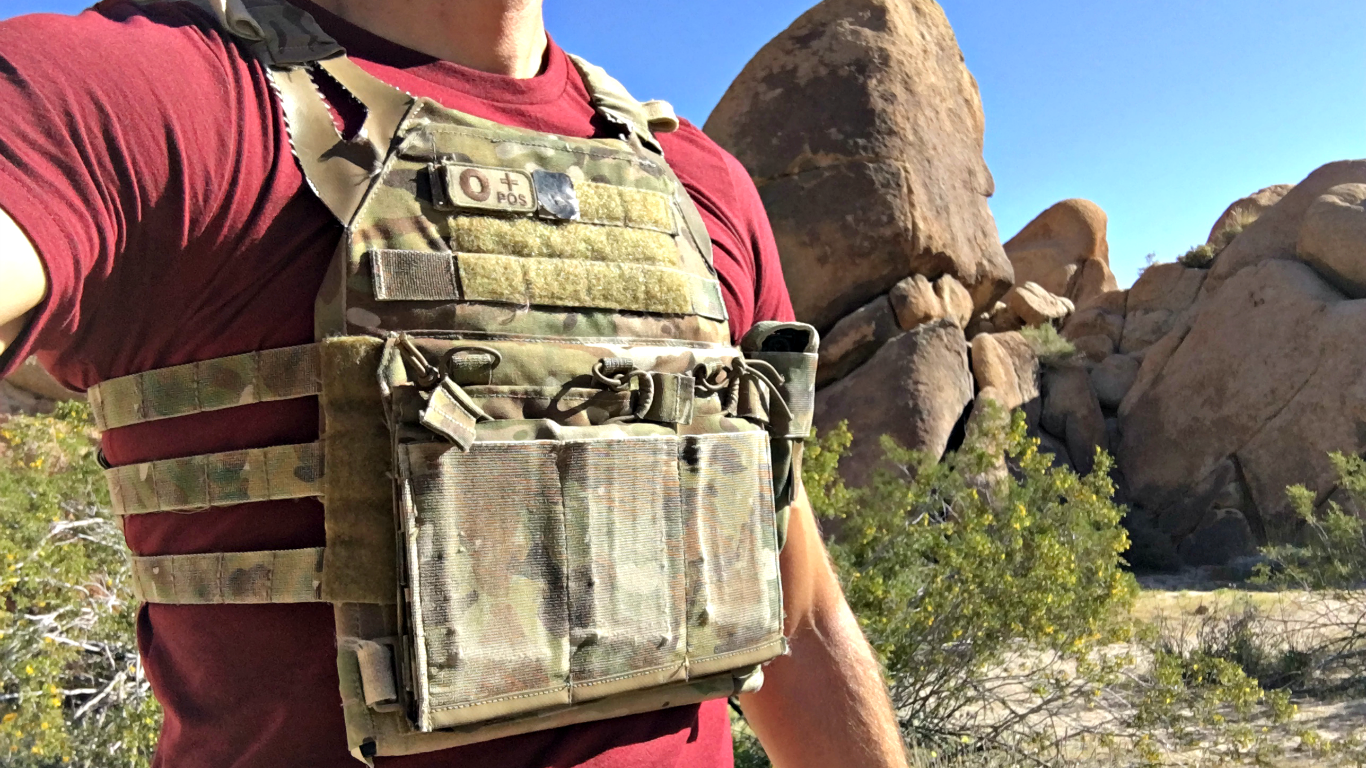 My time in the Service as well as with San Jose Police Department, didn’t leave room for much personal choice with respect to body armor. As I transitioned into the private sector, my choice for body armor and most any other personal equipment was wide open. While they did issue kit if you don’t have your own, I have found many shortcomings in the issued gear, which I have attempted to address with personal gear.

The issued plate carrier was trash. Overall a very poor design. One of the issues they have is being overly heavy. Overbuilt with heavy 1000 denier nylon. Not because of high wear or stress areas, just because someone though bigger is better. Another issue is the overuse of plastic buckles. Rather than a cummerbund there is a 2” piece of webbing with a large plastic slide release buckle which secures the front and rear plate pocket on either side.

These buckles are also used to connect the shoulder straps to the front plate pocket. And in doing so, the put a big hard piece of plastic right where you would ideally shoulder your rifle. Nothing about them was well designed, which is probably why the company that manufactured them is no longer in the tactical nylon business…

With these as well as other overarching problems in mind, like comfort, I began my search for a plate carrier for work. This is something I was going to spend a lot of time in and has the potential to be life saving, so I took my search seriously.

I finally settled on the Crye Precision Jumpable Plate Carrier (JPC). It was fairly new to the market at the time (early 2011), having been out for less than a year. I read what little I could on it and like many things on the internet, ordered it without having a chance to see it in person. When I got back stateside and had a chance to handle it, I was pleased to find that I had made a good choice.

The thing that strikes you immediately is how light the plate carrier is. The medium plate carrier (sized for 10”x12” plates) weighs only 1.3 lbs. This light weight is achieved by using newer textile technologies such as hypalon. Every detail of the design seems very well thought out.

Integrated into the front of the carrier is a triple mag pouch which features bungee retention in addition to a panel of female velcro across the interior of the magazine pouch. This allows you to affix small male velcro patches (which come with the carrier) to your magazine for extra retention or in place of the bungee retention, as well as the ability to velcro the entire integrated mag pouch closed for a lower profile. Personally I keep the integrated mag pouch closed and run a Blue Force Gear triple mag pouch across the front, keeping a fairly low profile (allowing me to shoot from the prone) but still having the option of putting a total of 6 magazines on my carrier if needed.

Also built into the top front of the plate carrier is a administrative pouch. Within it are three elastic loops allowing for the separation of items vertically. While the manufacturer’s photos show pistol magazines being held in this pouch, I found it to not only made for awkward and slow reloads, but the thickness of the magazines does not lend itself to being at all comfortable. I keep in my admin pouch 3 chem lights, some ear plugs, spare battery for NODs and a sharpie marker.

One of the big selling points for me is the low-profile cummerbund. It is essentially skeletonized molle webbing with stiffeners integrated into it so that you can attach pouches or side plates/armor to it. The design is a life saver in the unrelenting summer heat of the middle east. And the real bonus, due to its sleek design, is it does not interfere with drawing your pistol.

*A note on fitting this or any plate carrier. Ideally you want to be able to reach your chin down and touch the top of the front plate while wearing the carrier. If you can’t, it is two low and leaves your aortic arch exposed. I am not a doctor, but I can tell you that it is a much more vital area than your belly button… Don’t let your plate carrier sag down over your stomach, the vital stuff is up high*

The comfort of the plate carrier is awesome, or as awesome as 20 or so pounds can be strapped to your chest. While the shoulder straps aren’t padded, they are fairly wide and firm and don’t dig into your shoulders like some do. The low-profile shoulder straps allow for a much more natural and consistent shouldering of your rifle. No big plastic buckles or thick straps to contend with while shooting.

The comfort and movement in the carrier, especially when breathing heavy is very much appreciated. Along with all the training, shooting and general use I have put this plate carrier through in the last however many years, I have also done the Crossfit workout “Murph” in it a couple of times. The workout is a 1 mile run followed by 100 pull ups, 200 push ups, 300 squats and another 1 mile run. All of this done with a 20 pound vest, in my case the Crye JPC. This carrier really moves with your body.

In the last years I have only found two detractors of the design and both were easily overcome with a little ingenuity. First, if you still happen to be running a old school M4 stock on your rifle, with the metal sling attachment point… It can slip into the cutaway section of the hypalon strap when shouldering your weapon. This is fixed by removing that worthless metal piece with a screw driver or upgrading to a decent stock for your rifle.

The second issue which I have experience with and have observed in others with the same plate carrier, is that the shock cord is somewhat slick and the knots you put in the cord, with time, will work themselves out. This is easily addressed with wrapping your knots with tape once they are properly adjusted.

Something to keep in mind should you order one is the sizing. The sizing is directly related to the size of the plate. We run 10” x 12” plates, which corresponds to size a Medium carrier. The plate pocket is made with panels of stretch material that allows a snug fit for the proper sized plate, with or without plate backers. The shoulder straps and cummerbund will accommodate any size person regardless of height or weight. So size appropriately for the size of your plates you intend to use with the system.

In my years of use, a solid half of which was deployed using this carrier, I have had no issues to speak of. All materials and stitching have held up great. None of the velcro has worn out or become unusable. On a scale of 1 to 10 I would rate the Crye Precision Jumpable Plate Carrier a solid 9. And only then because of the very minor issues which I mentioned above. It works as advertised, is incredibly reliable, easy to put on and take off and it comes packed with features for a very fair price of $248.80 full retail from their site. (When comparing prices with other plate carriers, keep in mind this carrier has a integrated triple magazine pouch, allowing it to effectively be used right out of the box without any extra pouches)

Should you be in the market for a carrier you can’t go wrong with the Crye JPC. If I needed a new plate carrier tomorrow, I wouldn’t hesitate purchasing one again.

For the record the velcro dots are not for your magazine, but for the internal mag pouches to aid with stowing a magazine. Place the black dot in the center of the velcro on the mag pouch and it allows you to stick a corner of a mag into it by giving you a small open space. They are not for extra retention for "airborne ops" as most believe.

Good to know.  Although I think I promptly lost them and never used them.

Good to know.  Although I think I promptly lost them and never used them.

I realize you get tagged when folks post here but whatever the reason  keep coming back to LF Ivan.