The tape LOOKS really good. Do make sure to give an update on durability etc as that may finally be a fully decent easily-reversible option.

There is an accessory for the NX-8 you should consider.  You might have to sell a child though.  Thermal.

@Community Member what made you go with the NX8 instead of one of the other options? I played with the NX8 at SHOT this year and while I love the form factor and found it very bright the eye box did seem a little tight to me, especially compared to the Razor-E I put on my patrol rifle this year. I want to like the NX8 but I can't seem to figure out where it will work on my rifles.

It was a combination of the weight and reticle. I’ve been using Aimpoint Micros for many years and really like a simple single dot out to 100 or so, the 1st focal plane of the NX8 gives me that then brings the rest of the reticle into view when I zoom.

The Razor and the K16i were also in the running with the K16i being my preferred of the two given its weight. The one Default MP3 lent me was impressive, if I would have gone that way I think the 3 gun or 4 (something) reticle would have been my choice (I really don’t like Eotech type circle dot reticles). The eyebox on the K16i is very conducive for quick acquisition but I really think the 1st focal plane thing overall is more what I’m looking for (2x more zoom is pretty nice too). If I was interested in adding 1/4 Lb more to the gun the Razor would have been a good choice and (less expensive) but in the 21oz + weight range I’d probably want to throw the ATACR 1-8 into the mix (it’s eyebox is supposedly on par with the Razor & K16i as well) and for someone wanting to learn how to do range estimation with Mil dots (me) 1st focal plane seems like a better choice.

At the end of the day if I move the NX8 on down the road the next optic I’ll be trying will be the K16i...although I’m really liking the Nightforce and from initial testing (running around my house in the middle of the night taking snap sight pictures of my furniture) the eyebox isn’t as bad as the interwebs is making it seem (but take into account I’m primarily a AP micro user, someone coming from a large Eotech type window may disagree with my assessment). When I first got it I was worried about the eyebox prior to mounting it on my rifle...after getting it on with the proper eye relief it seemed like much less of an issue. Pro tip: if you’re checking out a NX8 in a shop by just holding it it’s gonna seem terrible...make sure you look through one mounted on a rifle.

Shoobe, will do...it should be interesting to see how it holds up. It’s cheap enough and easy enough to put on that replacing it once in a while wouldn’t be a big deal. I used less than a foot of the roll I got for $12ish off amazon and there is plenty left. You could probably do a full rifle or a dozen scopes with an full roll.

Mark - do show a link. And would it work iwth an ATACR rather than the NX8?

XTCBX - I don’t disagree that FFP is probably better for range estimating but it can be done in a SFP generally at max magnification. My 1-4 on my 5.56 gun is a mil-mil set up ( my first in this configuration) but it is an SFP. My 3-9 on my 7.62 gun is MOA-MOA and also SFP.

I ranged Mojo Jr. down the street at a measured 100 yards and my estimation at 9X came out to 97/98 yards. At that distance probably close enough for most situations I could be stuck in.

When we pick you up for Texas I’ll bring along my estimation chart for you to look over.

XTCBX - I don’t disagree that FFP is probably better for range estimating but it can be done in a SFP generally at max magnification...

Not always at max, but it's pretty much always marked on the mag dial. Not clearly, but there's a spare dot or something at the rangefinding magnification so you don't need the manual as long as you know the concept.

XTCBX - I don’t disagree that FFP is probably better for range estimating but it can be done in a SFP generally at max magnification...

Not always at max, but it's pretty much always marked on the mag dial. Not clearly, but there's a spare dot or something at the rangefinding magnification so you don't need the manual as long as you know the concept.

Yes.  I chose the word generally on purpose because if you don’t verify your reticle it’s probably pretty close to max.

My turret is not marked.   Or if it is I don’t know what I’m looking at

I did make a cardboard target at work with hash lines at 2 MOA (2.094”) intervals to verify my reticle which is in 2 MOA segments.

Mark - do show a link. And would it work iwth an ATACR rather than the NX8?

They are a German company based in Berlin.  At first, they said they couldn't mount it to a scope.  Others didn't accept that, mounted it, and determined that it can be used with magnification up to about 3x.  The lens cover is also the on-off switch.  Open the cover, the unit turns on.  Close the cover and it's off.  They also have a helmet mount so you can use look through it.  It attaches to a bayonet mount on the end of the scope, so assuming they have a mount of the right diameter, it should work with other optics.  It isn't cheap.  If I recall correctly, the price is about 2,500 Euro.  But it is pretty neat.

Right now, I have a Vortex HD2-E 1-6 and a K16i. I'll probably divest the vortex eventually -- or chuck it onto my kiwi clone LMT rifle that I shoot less often. But the rest of my 5.56 rifles are getting K16i, except the 416 upper that will keep a Comp M5.

My SR-25 group buy purchase is probably going to get a 3-20 for normal use (and an ATACR 1-8 for those times when having a true 1X is a good thing.)  Those of you who know where I work know why I buy a lot of toys.  It's my duty or some shit.

Not exactly for a fighting rifle, but a friend of mine convinced me to do this: 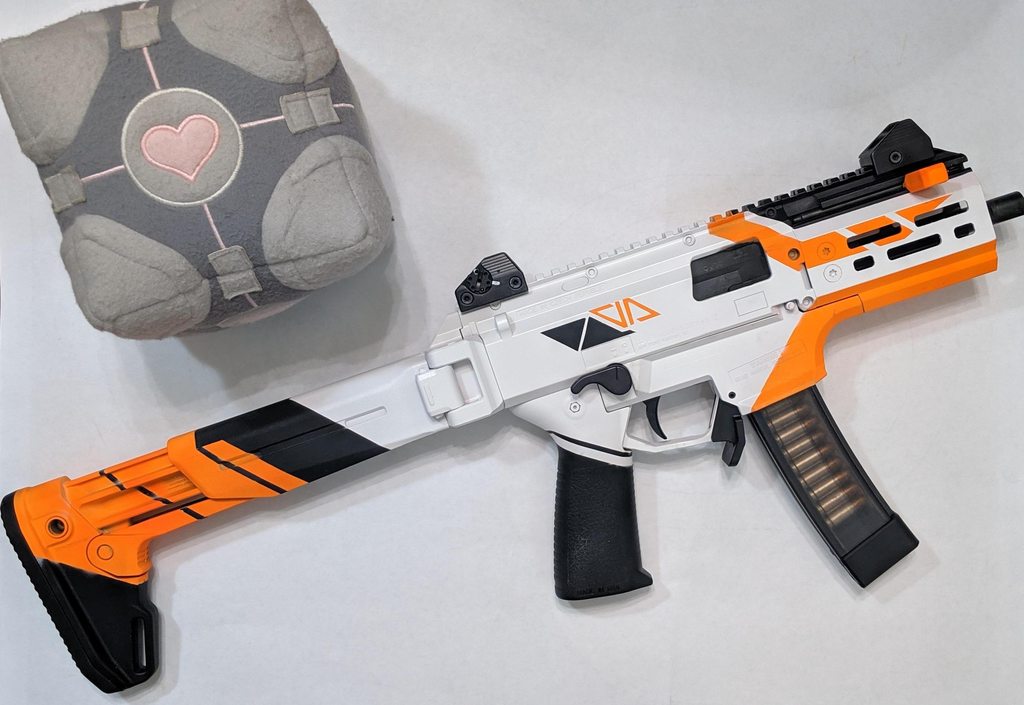 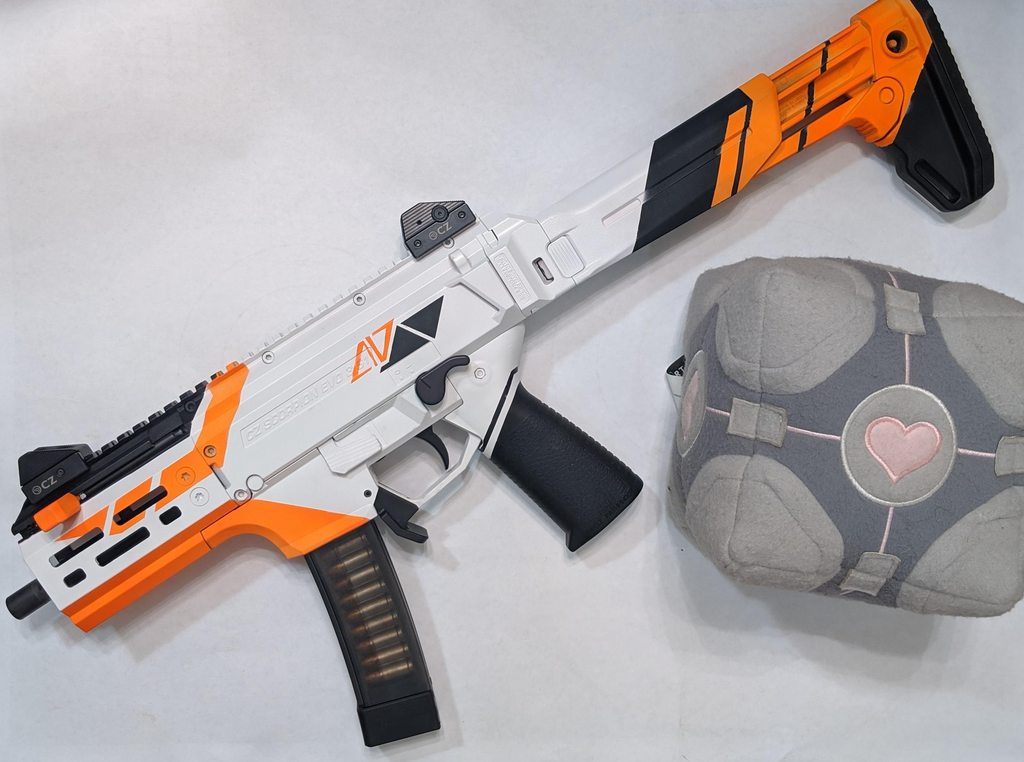 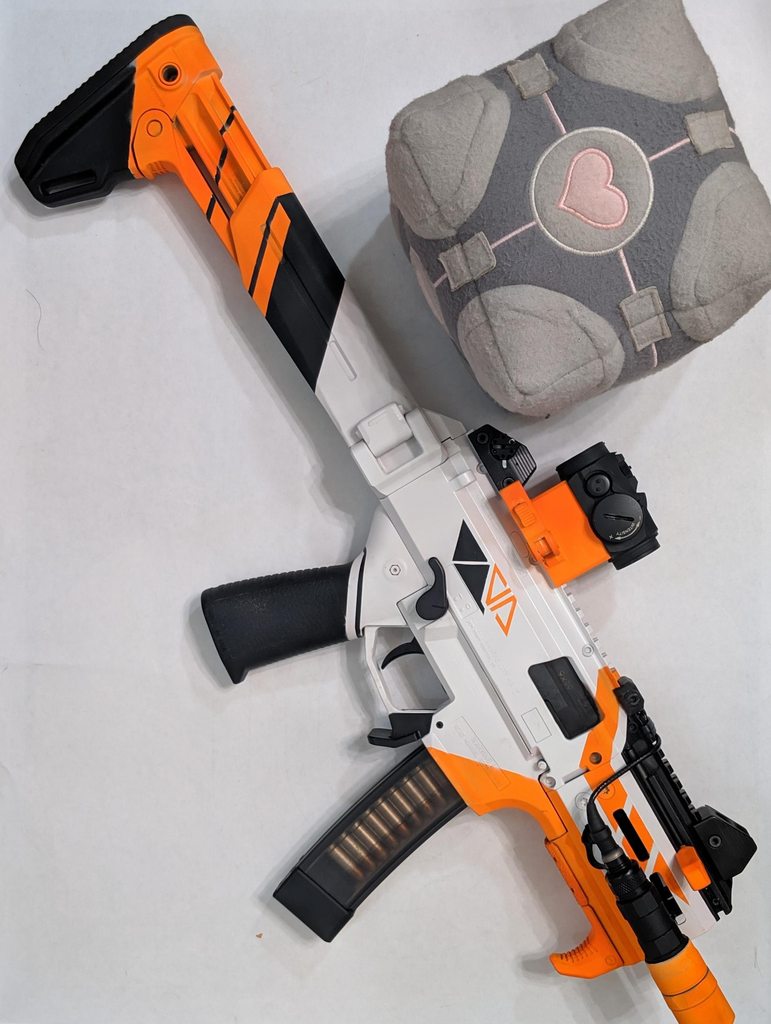 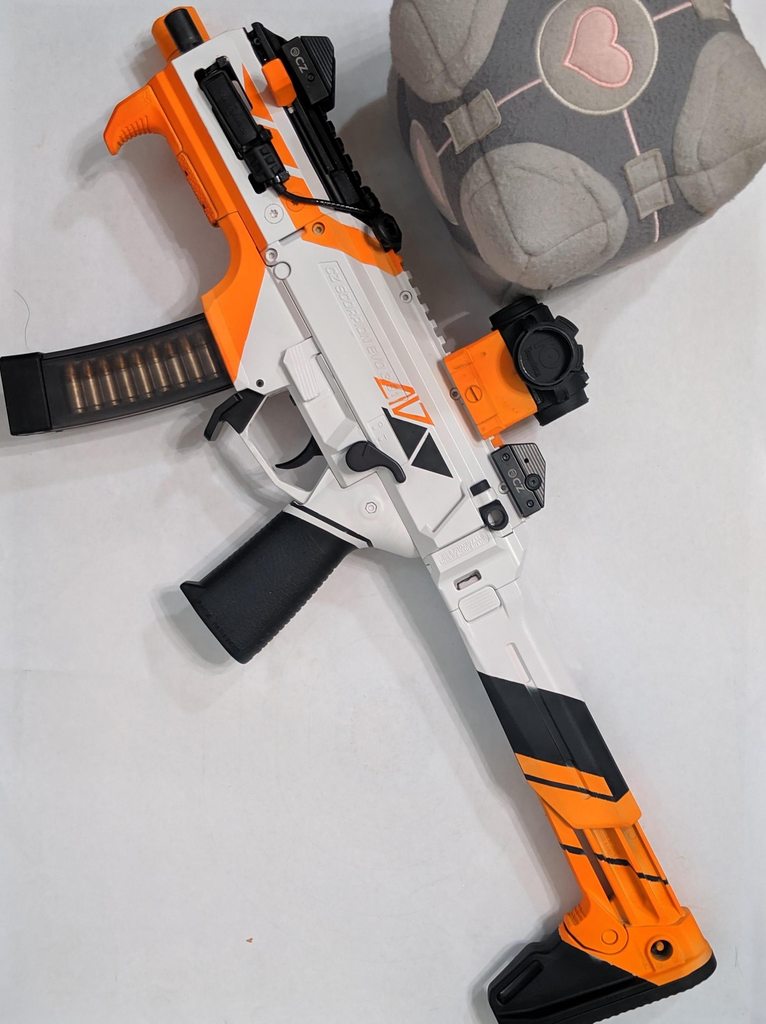 There is an accessory for the NX-8 you should consider.  You might have to sell a child though.  Thermal.

I know the local importer & played with them.

Even at 'mate's rates' I'd still to marry crazy RSA ex-fiance & sell the resultant progeny to PRC organleggers to get one.

Got the rattle cans out .

Painted the Daniel Defense. Not sure I can really blame Stephen at this point, but here it is.

Oh wow this is a blast from the past.  It's just fucking nylon!  What a classic.  Is Stephen still around?

Stephen hasn’t been seen here since late in 2014.

I still blame Stephen and Pat, and I have a lot of shit that's going to get the Aervoe Book of Pat treatment once the humidity drops a bit so it dries relatively quickly without being tacky.